Bangladesh’ 2011 progress report towards the Millennium Development Goals (MDGs) underplays the arsenic problem. The proportion of the population using improved drinking water sources is said to have reached 86%. However, the report takes the most conservative estimate of 20 million people exposed to arsenic contaminated drinking water exceeding the Bangladesh Drinking Water Standard (BDWS). In contrast, in 2001, the British Geological Survey estimated that 35 million were exposed to levels above the BDWS or 57 million above the stricter World Health Organisation (WHO) guideline. In 2000, the WHO warned that this could go up to 77 million. Is the drop down to 20 million suggested by the recent MDG report justified? We have serious doubts, for the following reasons.

In summary, the MDG report for Bangladesh suggests that only 14% of the population remain at risk. This is an overestimation of the progress for several reasons. First, stricter guidelines for arsenic in drinking water indicate a much larger proportion at risk. An aggravating factor is the additional exposure to arsenic through food from farmland irrigated with contaminated groundwater. Second, the report wrongly assumes that all SWOs installed since the discovery of arsenic are operative and community-based. The report suggests that if present progress is maintained, the target for safe water can be reached by 2015. We believe this to be an overly optimistic estimation considering the slow progress so far. 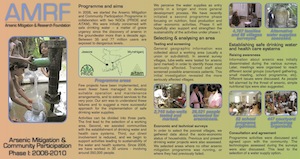 This reality check should be seen as an argument to start doing things differently. We have successfully implemented practical steps in collaboration with marginalised and vulnerable communities to establish water supplies and health support schemes that last.